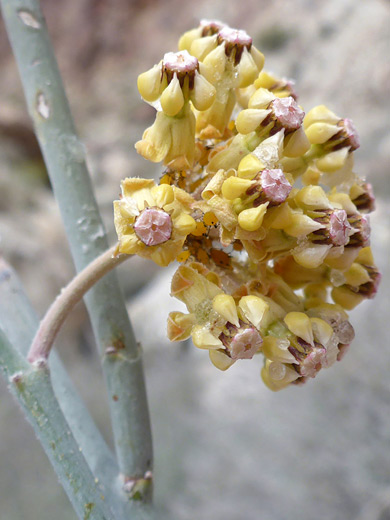 As implied by its common name, stems of asclepias albicans have a white, waxy coating, and are mostly leafless; the narrowly linear leaves, which form in twos or whorls of three at widely separated nodes, soon wither, and fall away before the flowers appear. Stems are rigid, and tall, commonly 6 feet or more, and become woody with age. Young stems, peduncles and pedicels have a light covering of very short hairs. Stems branch sparingly, mostly above the middle.

Flowers are produced in clusters, at the tip of the stems and from the former leaf nodes, on peduncles up to 2 inches long. They are formed of a five-lobed, greenish yellow corolla, fully reflexed back along the pedicel, below an elevated ring of five yellow-brown hoods and a reddish-brown stigma head. Within the hoods are five narrow horns, their tips protruding above. March and April are the usual blooming months, but flowers can appear at any time of the year. 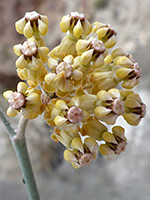 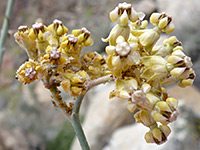