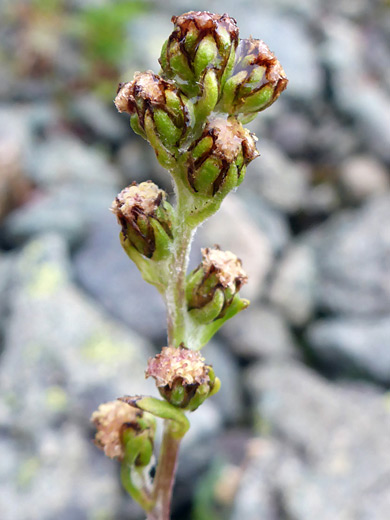 Artemisia norvegica is most easily identified by the phyllaries that enclose the small, globular flowerheads - they are relatively broad, ovate in shape, bright green in color, and have quite wide, brown or black margins. Flowerheads are about a third of an inch in diameter, and contain tightly packed yellow or reddish disc florets, of which some (6 to 12) produce only pistils, while the majority (50 to 70) produce both pistils and stamens. Flowerheads are usually nodding when mature, and are arranged in an elongated, generally unbranched cluster at the top of the stem.

Plants have one, two or three stems, usually attaining a height of about one foot. Stems may be green or red, hairless or sparsely covered by short, flattened hairs. A few leaves grow on the stems but most are at the base, and they also may have a fine hair covering. Leaves are divided into short (up to a third of an inch), linear lobes. Most US specimens of artemisia norvegica are the saxatilis subspecies, which has wider flowerheads. 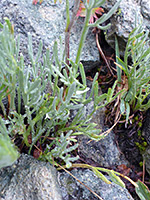