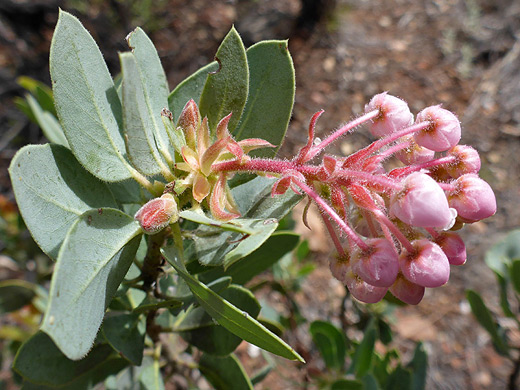 There are several dozen species of manzanita in the US, most with limited distribution, and many occurring only in California. Arctostaphylos pringlei is one of only three species commonly found in Arizona, its range extending into adjacent areas of the Mojave Desert. Plants are large, branched, leafy shrubs, and the stems, leaves and flower stalks are densely covered by short, glandular hairs. Leaves are dull grey-green in color, rounded at the base and pointed at the tip. Older stems have smooth, reddish bark which gradually peels away.

Flowers form as an elongated cluster at the tips of the branches, subtended by bright pink, lanceolate, leaf-like bracts, which wither after blooming. Individual flowers have five small, pink sepals, at the base of a pink, urn-shaped corolla which opens to five tiny pinkish-white lobes. Inside are ten stamens topped by dark red anthers.

There are two subspecies, differentiated by the stones within the fruits. For ssp drupacea (restricted to the mountains of southern California) the stones are joined to make a sphere, while for the more widespread ssp pringlei they are separate. 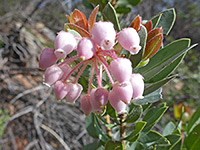