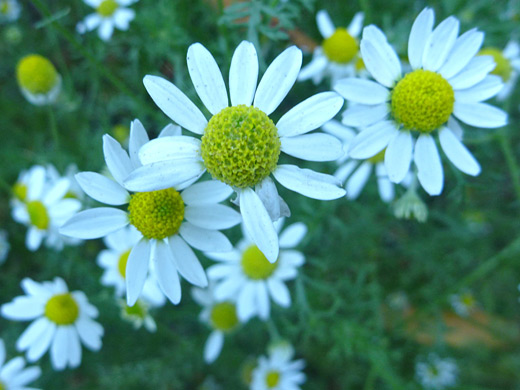 The common name of anthemis cotula, stinking chamomile, refers to the strong, unpleasant smell that the plant exudes. This is a non-native US species, originally from North Africa and Europe, now found in scattered areas of all states, and classed as a weed. It is found in a variety of habitats, from near sea level up to 8,500 feet. Stems grow upright, branch readily, and are usually hairless, but covered with small resin glands. Leaves are finely divided.

The flowerheads are formed of 10 to 15 broad, white, non-overlapping ray florets around a domed center of up to 300 greenish yellow disc florets. Ray florets have two notches at the tip. Occasionally the rays are absent. Heads grow singly at the top of the stem branches; they are about one inch in diameter. 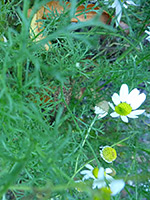