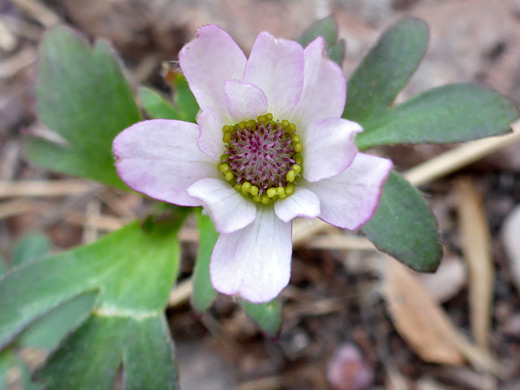 Flowers of anemone tuberosa are produced singly or in small groups, usually two or three, sometimes up to five, on stalks which are covered with shaggy hairs towards the tip but hairless near the base. Flowers are formed of between eight and ten sepals, up to 0.7 inches long, white to pale pink in color, and sparsely hairy underneath. These surround a disc of between 50 and 60 purplish stamens, ringed by the yellow-green pistils. After blooming, the receptacle elongates markedly.

A little way below the flower is whorl of three leaf-like bracts, each divided into narrow lobes, with irregular, finely toothed margins. Occasionally a second whorl is present. At the base of the stem are between one and three leaves, generally similar in form to the bracts; ternately divided once or twice into lobed segments. Leaf surfaces are hairless, and the margins are often purplish. Leaves are attached by stalks of up to 2.5 inches. 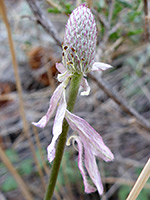 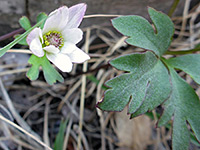