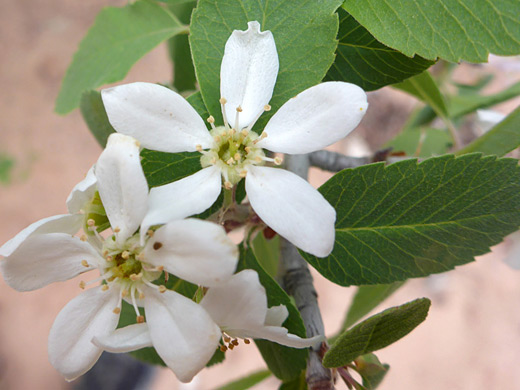 Amelanchier utahensis is a large, much-branched shrub found across most of the West, as is the very similar amelanchier alnifolia; this latter has longer petals, larger and less hairy leaves, and less pronounced leaf veins. Leaves of the Utah serviceberry are usually oval, rounded or heart-shaped at the base and rounded at the tip. Veins are quite prominent, and the edges have between three and eight teeth (sometimes more), concentrated along the upper half. Leaves have stalks of half an inch or less. Leaf surfaces are moderately hairy, more so on the undersurfaces; both sides tend to loose hairs after flowering.

Flowers are produced in groups of 6 to 10; they have five green, oblanceolate sepals, which curve backwards after flowering, and five white, oblong to oblanceolate petals, between two and three times as long as they are wide. Stamens usually number in the range 13 to 19, the styles 3 or 4, fused only at the base. Fruits are dark purple berries, or pomes, less than half an inch in diameter. 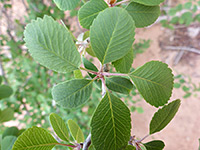 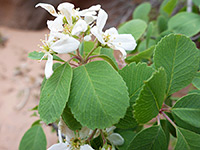 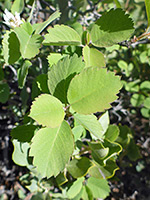 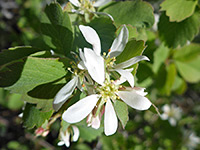