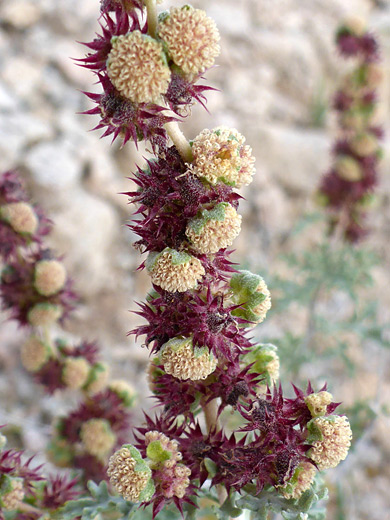 Stems and leaves of ambrosia dumosa, a small shrub, have a covering of soft, strigose hairs, giving them a greyish appearance. Stems are rigid and much branched, bearing alternate or (less often) opposite leaves at closely-spaced intervals. Leaves are divided up to three times into short, rounded segments, and they usually have short stalks, up to a third of an inch long.

The inflorescence is a terminal, elongated cluster of both staminate and pistillate flowerheads, subtended by narrow, pointed bracts which are initially green and flexible, but later darken in color to purple, and harden, forming a bur, enclosing the spherical fruit. Pistillate heads have just one or (usually) two florets, while staminate heads contain between 8 and 15 or more, and are subtended by one row of green phyllaries, which are fused at the base. 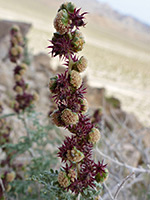 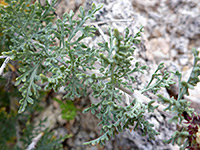