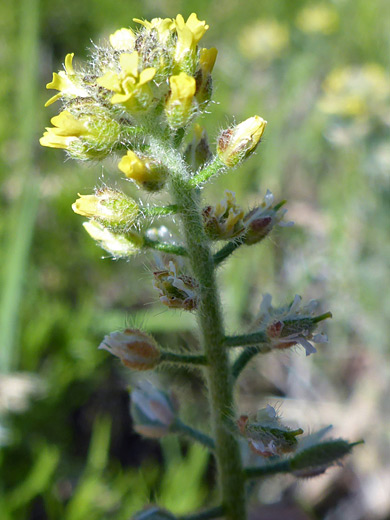 Alyssum simplex originates in Europe and Asia, and has been established in parts of 11 states in the West, where it is most widespread in Arizona, Colorado and New Mexico; one of six non-native species of this genus in the US. Leaves, stems and pedicels are evenly covered by short, grey-white hairs, which are divided into between five and ten rays. Plants produce one or several stems, from the ground, and these usually grow vertically upwards. Stems are generally unbranched. Leaves are arranged alternately along the stems, becoming gradually smaller towards the tip.

The inflorescence is an elongated cluster along the upper few inches of the stem. The small flowers are formed of four oblong, green or reddish sepals less than 0.1 inches in length, covered by star-shaped hairs, and four oblanceolate yellow petals, slightly longer. Petals are usually notched at the tip. The green fruits are round, flattish discs, slightly expanded at the middle, and they also have a stellate hair covering. 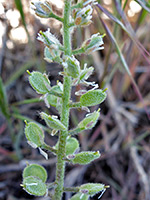 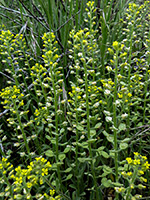