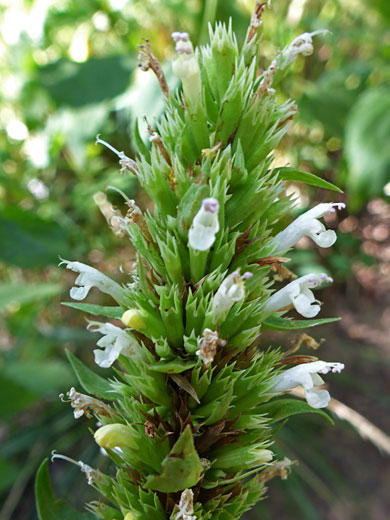 The flower color of agastache pallidiflora ranges from white to dark pink. The tubular corolla is around half an inch long, opening to a reflexed lower lip and a spreading, cupped upper lip, which conceals the purplish anthers. The two-lobed style is exserted, projecting beyond the upper corolla lip. Calyces are green or pinkish, divided towards the apex into five teeth, whitish along the margins. Flowers are brown when withered. The inflorescence is a dense, elongated cluster, in which only a small number of flowers are in bloom at any one time.

Plants produce one to several stems, typically between 2 and 3 feet in height. Leaves are dull green in color, on both surfaces, blunt-pointed at the tip and almost flat at the base.

There are two subspecies of agastache pallidiflora, both of which exist in several varieties: ssp neomexicana of New Mexico and Texas, and the more widespread ssp pallidiflora; the former has pink flowers, the latter usually white. 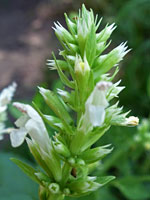