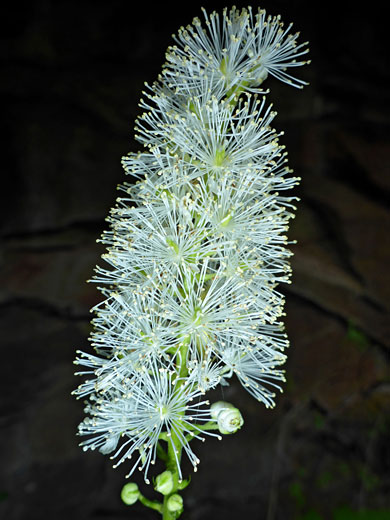 Actaea arizonica, formerly cimicifuga arizonica, is an uncommon species, only found in a few locations in central Arizona, in the vicinity of Sedona and Flagstaff. Plants grow in rich soils along the floor of shady ravines, usually close to water.

Stems are relatively tall, up to five feet, and hairless. Leaves are divided two or three times into toothed leaflets, the longest of which (terminal to the initial divisions) are up to 6 inches in length and have three prominent veins radiating from the base. Leaves are hairless, or nearly so, and are attached by stalks of up to 13 inches.

Flowers are produced in two or more dense, elongated spikes, up to 17 inches in length; they are formed of five sepals (two green, the others creamy-yellow), two short, clawed, white petals (sometimes absent), up to 75 stamens, and from one to three pistils. The stamens are the longest component, up to 0.4 inches; they have white filaments and pale yellow anthers. Fruits (usually two per flower) are green, bean-like capsules, containing several seeds. 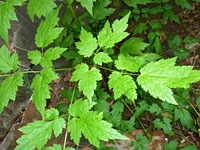 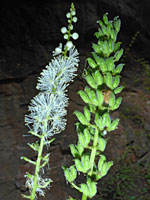