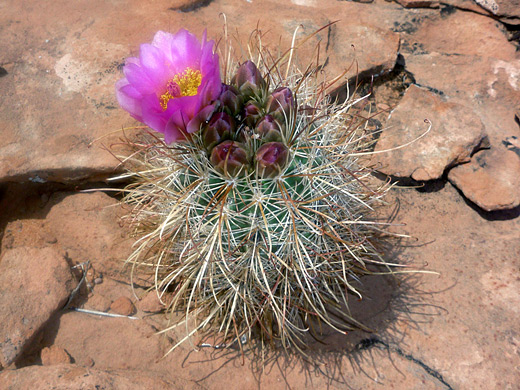 Along with the similar sclerocactus whipplei, which overlaps for some of its range, sclerocactus parviflorus is the most common and widespread member of this genus, found all across the Colorado Plateau and northeast Utah, at elevations between 3,500 and 7,000 feet. The plant is quite changeable in such aspects as flower color and spine characteristics, and exists as several named varieties, but all are generally spiny, the ribbed stems bearing clusters of stout spines, variable in length and color, with at least one hooked central spine, giving a generally shaggy appearance and largely obscuring the body of the plant. The 4 to 6 inch diameter stems can be tall - up to 15 inches high, though half that is more typical.

Radial spines number 8 to 17, and are usually white, less commonly light brown or purple. There are 4 to 6 central spines, projecting outwards at varying angles, of which 1 to 5 are hooked, and two (usually) have diagnostic colors; abaxial (pointing downwards) is purple black while adaxial (pointing upwards) is white. Spines from adjacent clusters overlap greatly. The related but less common plant sclerocactus whipplei may be distinguished by its adaxial spine, which is noticeably flattened.

The springtime flowers of sclerocactus parviflorus are usually pinkish purple but may also be lighter pink, pale yellow or greenish yellow, while the fruits are more consistently green at first, later pink. 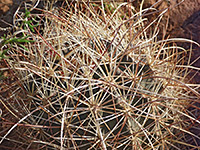 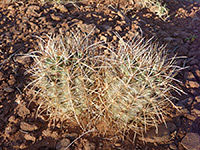 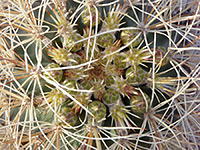 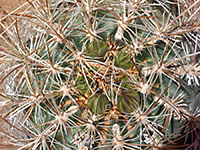 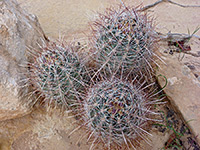 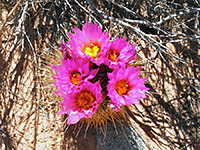