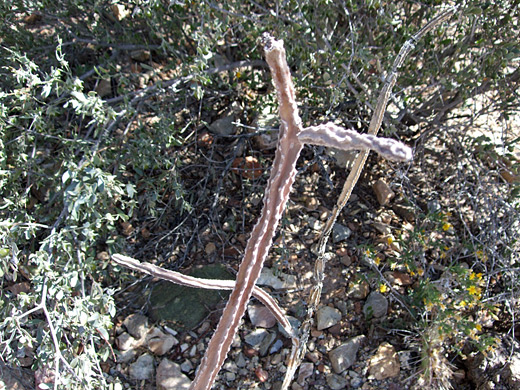 Although quite widespread, across three Southwest states, peniocereus greggii is a little known and rarely seen cactus since its thin, unremarkable, green or brown stems are shriveled much of the year and resemble the branches of the creosote bush and other shrubs which the plant grows amongst. Stems may have a few branches, but most spreading occurs from the base. Only when the large, frilly white flowers bloom (either along the branches or at the tip) does the plant become noticeable, but this happens during the night, the flowers staying open just a little way into the following day. The bright red fruits remain on the stems for several months, however.

Stems have 4, 5 or 6 ribs, bearing well separated clusters of 11 to 15 short, yellow or grey-white spines, only about a quarter of an inch long. 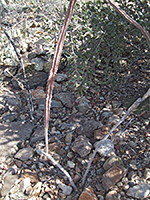