Plants > Cacti > Pediocactus
The pediocactus genus include some of the smallest cacti in the US, growing mostly in north Arizona and Utah. Eight of the nine species are rare (pediocactus simpsonii is the exception), and most occur in very localized areas, sometimes of just a few square miles. They are known as pincushion cacti. 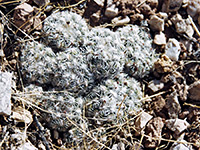 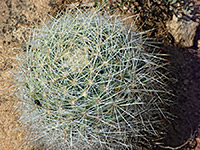 Mountain ball cactus
Pediocactus simpsonii
There are seven other US species: