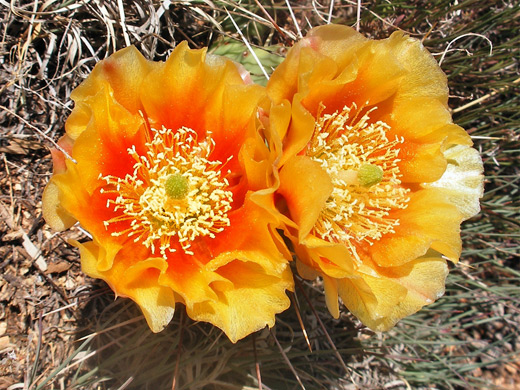 Like the similar opuntia engelmannii, opuntia phaeacantha is a widespread but variable prickly pear species, prone to hybridization, and showing differences in spination and flower color. The plant forms low, spreading clusters, 2 to 3 feet high, of oval or nearly circular stems, bearing clusters of 8 or fewer white or brown central spines, between 1 and 3 inches in length and quite thick, so longer and more substantial than some comparable species. Areoles towards the base of the pad often have no spines; sometimes spines are found only at the areoles on the uppermost quarter of the pad. During dry periods the dark green pads (which can be up to 9 inches long) may take on a purplish tinge along the tips.

Central spines point outwards or downwards, while the 1 to 3 lower (abaxial) spines always point downwards, and are much shorter, generally less than half an inch. Opuntia polyacantha is another similar species, but this generally has more spines per areole, and is less likely to have areoles with no spines. 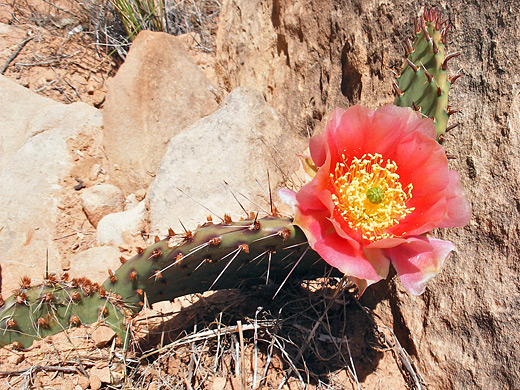 Salmon pink flower
Flowers appear in spring and early summer, and are also variable in color; they may be lemon yellow, orange or pink, usually with but sometimes without a reddish center. The fruits are reddish purple. 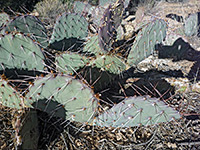 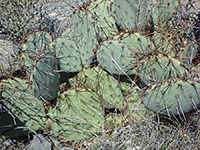 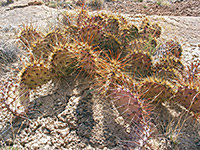 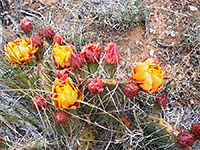 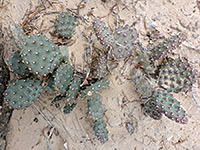