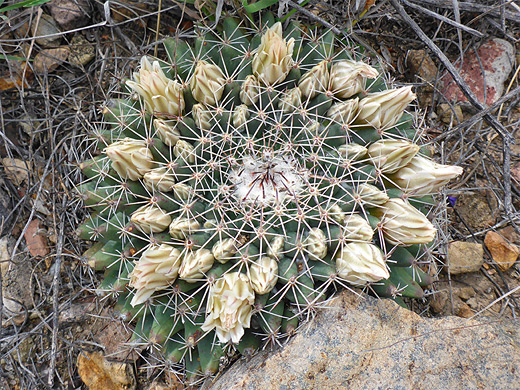 Mammillaria meiacantha is a low-growing species, up to 6 inches or more in diameter but usually just a couple of inches tall, and often partly obscured by grass or other vegetation. During dry spells the height is reduced further, to or even below the ground level. Spine clusters are borne on elongated, closely spaced green tubercles, and they consist of a single central spine, angled upwards, and between 5 and 9 (usually 6 or 7) radial spines. All spines are similar in length (up to half an inch), and color (light grey, brownish red or pinkish, with darker tips), while the centrals are only slightly thicker than the radials.

Flowers grow between the tubercles in several rings near the top of the plant, opening in stages over several months in spring. Flowers have light green stigmas, pale yellow stamens and white or pale pink petals, darker down the middle. Fruits are colored purple or pink, and appear later than most other cactus species, between October and March. 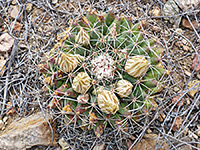 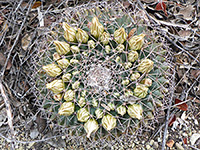