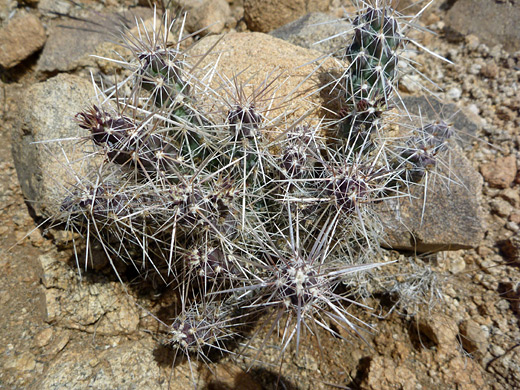 Grusonia parishii (matted cholla) forms low, spreading mats, several feet in diamater, usually with a maximum of two segments per stem. These are clavate in form - tubular but wider towards the tip, and bear prominent, narrow tubercles. There are between 14 and 17 spines per areole, in some specimens mostly concentrated around the apex, in others more evenly arranged. The five to six lower central spines are angled downwards, flattened, and colored white to grey, while the 5 upper central spines point outwards, are slightly darker in color, and cylindrical. Spines are up to 2 inches in length. The spines often completely cover the dark green stems, making the plant appear lifeless, hence one common name of dead cholla. Glochids are yellow; on the areoles, and the fruit (which lack spines).

Matted cholla is a plant of the Mojave Desert, and is the only grusonia species for most of its range, overlapping only slightly with grusonia pulchella to the north and grusonia kunzei to the south. 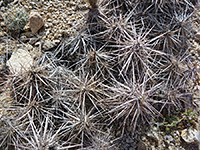 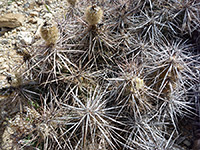 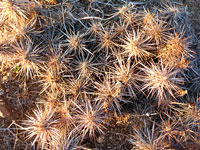