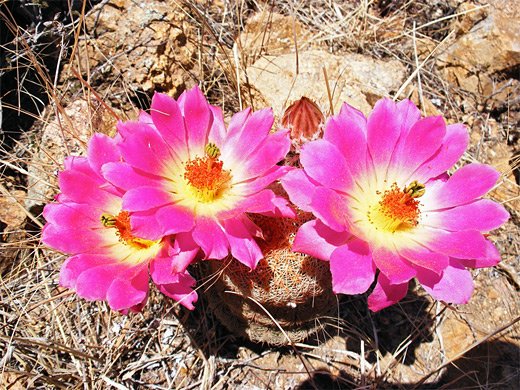 The large flowered echinocereus rigidissimus has relatively limited distribution in south Arizona and south New Mexico. The short spines, all radial, are angled back close to the stem, and are variously colored light brown, white, pink or grey, often in rings of differing shades - like a rainbow, hence the plant's common name. The variation results from changing growing conditions from year to year, a trait the plant shares with the Texas rainbow cactus. The showy pink flowers are often wider than the plant itself. The species is very frost tolerant, and may be found quite high up in the southeast Arizona mountains.

The unusual and beautiful rubispinus variety, found only in north Mexico, has shorter pink or red spines, arranged in neat rows, and produces similarly pretty flowers. 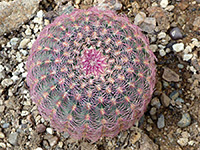