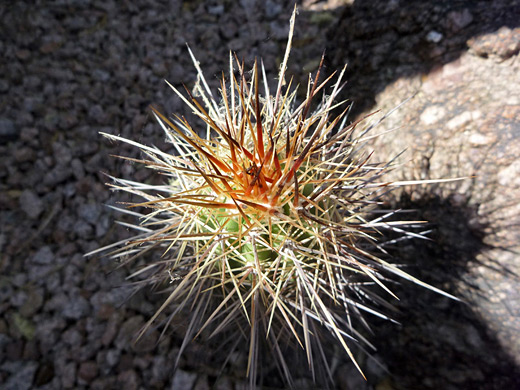 Once considered a variety of echinocereus coccineus, echinocereus arizonicus is also very similar to echinocereus triglochidiatus, the main differences being the number of ribs (8 to 13 cf. 5 to 8), the number of central spines (1 to 8 cf. 0 to 4), and the shape of the spines. The cactus forms small clumps, with generally fewer heads than the two related species, and individual stems are slightly smaller, up to 15 inches tall and between 2 and 4 inches in diameter. Radial spines number between 7 and 14, and are initially yellow to brown, becoming grey with age. Central spines are darker colored but also eventually become grey.

This species inhabits small areas of Arizona and New Mexico; the main region is approximately between Nogales and Lordsburg, while the plant is also found in the Superstition Mountains and the Mescal Mountains of central Arizona. Central spines number between 1 and 4 for specimens from these latter regions, but 3 to 8 for the other populations. 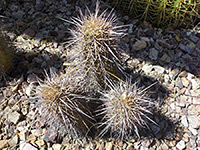