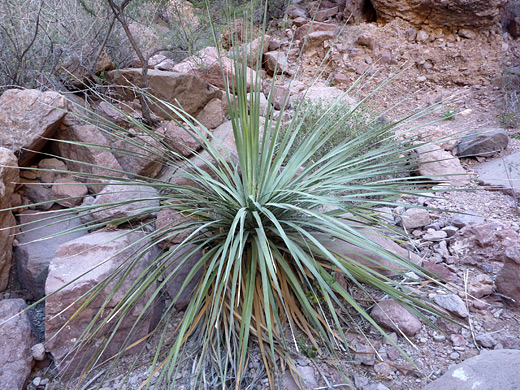 Nolina bigelovii is found in isolated, desert locations in west Arizona, southeast California and the southern tip of Nevada, from the lower reaches of the Grand Canyon to Anza Borrego Desert State Park. Plants typically have between 50 and 150 leaves, each around 4 inches wide at the base but only an inch or so across for the remainder of their 2 to 3 foot length. Young leaves have a finely toothed margin, while mature leaves have partly shredding edges, separating into thin, coiled fibers. Old plants may branch a few times and form a trunk, up to 7 feet tall though partly or mostly underground, and usually hidden by the lower, dead leaves.

Flowers are typically small but numerous, borne along the upper 2/3 of the branched stalk, which persists for many months after blooming. 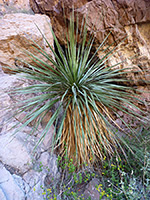