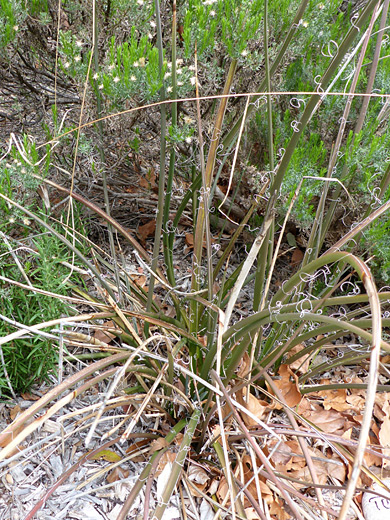 Hesperaloe parviflora is primarily a Mexican (Chihuahuan Desert) species but grows naturally in the US in a few places close to the border, and is used as a landscaping plant more widely, in particular around Phoenix in Arizona; it is very drought tolerant and so suitable for the most arid regions.

Leaves are up to 4 feet long, narrow (between 1 and 0.5 inches across), and similar in width almost to the top. Leaf margins are lined with thick, coiled, white threads, quite widely separated. The inflorescence is produced in late winter and spring; a stout stalk up to five feet tall topped by an elongated cluster of narrow, tubular flowers with six red or pinkish tepals, more lightly colored on the inside. Anthers are yellow-orange, triangular in shape.