Steeply-descending path though mixed forest to a remote and peaceful grove of giant, old growth redwoods beside Redwood Creek, including what was the tallest tree on Earth. The trail ends with a circuit through the grove

Difficulty: Easy to moderate; not long but rather steep

Usage: Low; numbers restricted to 50 per day, with access via a free permit

Around 30 percent of the 110 square miles of Redwood National Park is occupied by old growth redwood forest, and most of this is spread out across the lower reaches of the deep valley of Redwood Creek, which winds southwards from Orick, the creek flowing below hills that rise over 2,000 feet above. Hidden 8 miles along this valley is a group of particularly huge redwoods, the Tall Trees Grove, including what was for 20 years the tallest known redwood on earth, the 368 foot Libbey Tree until the uppermost few feet was lost, probably during a storm, while several taller specimens were discovered elsewhere in the valley, their precise location kept secret. The tallest is now the Hyperion Tree, 380 feet, half a mile away on the opposite side of the creek.

The Libbey Tree commemorates Howard Libbey, a former president of the Arcata Redwood Company, which once owned all land hereabouts, and cleared large areas of the ancient forest. The Tall Trees Grove was formerly known as the Arco Grove of the Giants.

Unlike other famous redwood groves in the park which are either close to roads and so subject to traffic noise, or easily reached and hence often rather busy, the Tall Trees Grove is a particularly serene and peaceful place due to its remote location, accessed only by a 6 mile unpaved road followed by a rather steep trail (1.3 miles, descending 700 feet), and because visitation is limited, restricted to a maximum of 50 groups per day; a free permit needs to be obtained from the visitor center (or online). Successful applicants also receive a code which opens a locked gate at the start of the access road. The route down passes a few imposing trees but the great majority are concentrated right at the end, on the flat valley floor bordering the creek, and may be viewed along a 0.9 mile loop path. The permits are rarely all taken, but the mere fact of needing to obtain one keeps visitor numbers down, along with the limited parking space.

The 6 mile access track, Tall Trees Road, which is unpaved but fine for most vehicles including small RVs (up to 21 feet), forks off Bald Hills Road 7 miles from US 101 just north of Orick, and a short distance south of Redwood Creek Overlook. It contours south across the steep hillsides, through new growth forest, gradually descending, and ends at a small parking place at 800 feet elevation, above the valley of a tributary drainage, Harry Weir Creek. In theory this location can be reached by walking from Bald Hills Road, without need for a permit, using a lesser track at one point to reduce the distance to 5 miles. Another way to reach the grove is via the Redwood Creek Trail which follows the valley floor all the way from Orick.

The parking area is right at the edge of the new forest; the Tall Trees Grove Trail immediately enters the old-growth trees, still relatively small due to the high elevation and consequently drier environment, and is initially fairly level, traversing the slopes westwards through rather overgrown surroundings, lacking any long-distance views due to closely spaced trees, abundant ferns and tangled bushes. The steep section starts after a third of a mile, 600 feet down the side of a sloping ridge to the level land next to Redwood Creek, and the start of the loop section. The Libbey Tree, a conjoined redwood, is a short distance down the left-hand path, very close to the creek, while dozens of other huge trees tower above in all directions, including two that are taller. The current record holder in the grove is the Nugget Tree, 373 feet, the third highest in the world. The western section of the trail is mostly through a band of maple trees, between the redwoods and the creek. Because the grove is quite far inland so less affected by coastal fog, and is bordered by the open corridor of the creek, the conditions here are often bright and sunny, in contrast to some other popular locations which are generally less well illuminated. 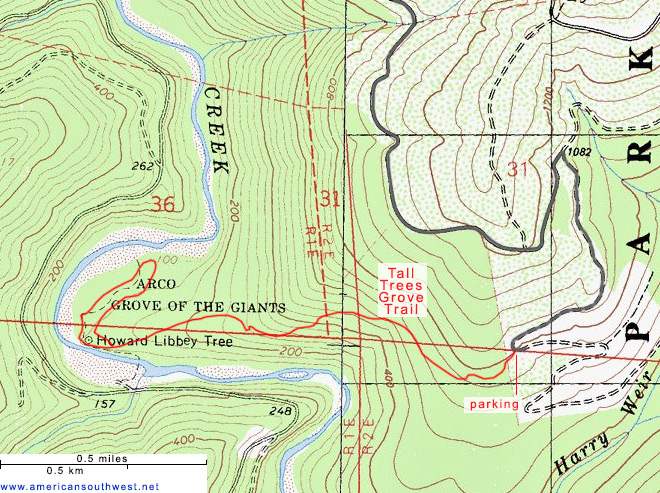 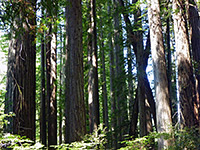 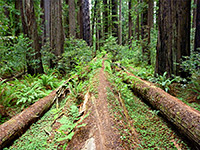 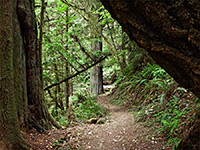 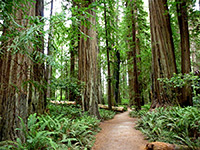