Highlights:
Granite domes and pinnacles at the top of a wooded mountain, bordering the Sacramento River Valley. Park includes a campground and several trails, including a 2.7 mile route rising nearly 2,000 feet towards the summit
Nearest towns with hotels:
Dunsmuir, 8 miles; Mount Shasta, 13 miles
Management:
California State Parks
Location:
41.149, -122.318
Seasons:
Spring and fall are best; summers are rather hot, while in winter the trail is covered by snow
Rating (1-5):
★★★★★ 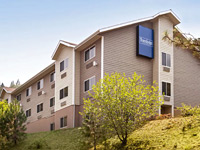 Interior corridor motel in Dunsmuir, beside I-5 exit 732, within walking distance of two waterfalls, and 8 miles from Castle Crags State Park

Hotels in Dunsmuir - Affiliate disclosure
Although the 400 mile long Sierra Nevada is formed of granite, the mountains further north in California tend to be volcanic in origin, most prominent being the Cascade Range of which Mt Shasta is the best known member. But occasional granite outcrops do occur in the north, and one of the largest is the Castle Crags, a group of jagged, vertical-sided, glacier-carved peaks, domes and pinnacles, rising high above the Sacramento River Valley, 40 miles north of Redding. The crags form an oasis of slickrock in an otherwise uniformly wooded landscape - the surroundings (part of Shasta National Forest) are endless rolling hills, crossed by numerous valleys and accessible only by rough tracks.

The edge of the peaks and a short section of the river are contained within Castle Crags State Park, which has a 76 camping spaces, a few fishing and picnic sites, and a section of the Pacific Crest Trail, though the main feature is the 2.7 mile Castle Dome Trail (also known as the Crags Trail), climbing 1,950 feet through the forest to the edge of the granite formations. Outside the park, most of the crags are part of a wilderness area, though access is not easy owing to the steep and irregular terrain. No trail enters the center of the rocks, and exfoliation makes them generally less than ideal for rock climbing. Elevations in this part of north California are fairly low, in the range 2,000 to 5,000 feet, so conditions are often rather hot during spring and summer.

Edge of the Castle Crags

The state park is easily reached via interstate 5, running for many miles beside the Sacramento River through quite a deep valley. The entrance is right next to exit 724, via a paved road that continues westwards along Castle Creek and soon reaches the Shasta National Forest boundary, passing plenty of potential camping places - quiet, free alternatives to staying in the state park, for which overnight fees (2020) are $35. Day use is $10. After the entrance station, a narrowish road leads to the campsite and climbs to a vista point at 2,600 feet, from where begins the trail to the crags. The upper part of this road is not suitable for RVs so they have to be parked at the entrance; a connecting path (Bobs Hat Trail) starts here, adding half a mile and 500 feet elevation to the journey. This route is partly along old logging tracks, but both paths start off similarly, through thick, tall woodland without any views. The trees are mixed oak/pine/maple around the foothills, becoming mainly fir and spruce higher up, but are consistently tall, and don't allow much undergrowth to develop. Lizards are the most abundant wildlife; other species that may be encountered are rattlesnakes, squirrels, mule deer and black bear.

The two routes both cross the Pacific Crest Trail and meet about half way up the mountain; the path then continues ascending steadily via long, straight sections, eventually curving around the edge of a ridge as the trees start to thin out,
Affiliate disclosure

and the crags are properly visible for the first time, through gaps in the forest. The surface underfoot becomes rockier and the path has a few steeper parts as it climbs to the junction with a 0.2 mile spur path to Indian Springs, where water seeps out from several sources, one right on a cliff face. This trail runs partly across a treeless hillside, with good views of the crags above and the valley below, and the main trail is also soon climbing across open slopes, past a few granite exposures and ending with a traverse of a manzanita-covered hillside to a railed viewpoint at the brink of a chasm next to Castle Dome, a big summit at the edge of the granite area. Mount Shasta is prominent to the north, while the main granite crags are to the west (see panorama). A few small peaks nearby allow for climbing and scrambling but there is no easy route to get further into the crags because of vertical cliffs and deep ravines. The rocks are clean and crisp - grey/white granite, not covered by lichen or other vegetation, similar to many places in the Sierra Nevada though rather more irregular in appearance.