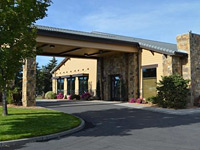 Interior corridor hotel in Hines along US 20, within an hour's drive of many scenic sites in southeast Oregon. Free full breakfast is provided

Hotels in Hines - Affiliate disclosure
Oregon's southeast corner forms the northernmost section of the Great Basin Desert, which also covers west Utah, part of Idaho and most of Nevada. In Oregon the desert is crossed by narrow mountain ranges separated by sagebrush flats, dry lakes and salt basins, quite a contrast both to the thickly forested hills to the west (at the edge of the Cascade Range) and the rolling, partly agricultural landscape to the north, seen for example around the John Day Fossil Beds.

The southeast is virtually uninhabited; the only significant towns are scattered around the edge of the desert, including Plush and Lakeview on the west side, and Burns and Hines to the north. Paved roads are equally uncommon. But besides the general appeal of the expansive, arid scenery, the desert harbors many smaller sites of interest, including hot springs, wetlands, lakes, historic sites, volcanic remains and river canyons. Most of the land is publicly owned, managed by the BLM, and so open for largely unregulated exploration.

Pillars of Rom
The Great Basin Desert in Oregon is bordered to the west by low hills of the Fremont and Deschutes national forests, and by Highway 31, which runs all along their base. The northern extremity is less well-defined but approximately coincides with US 20, north of which the land becomes more overgrown and higher in elevation, including several mountains such as the Ochoco range. The eastern boundary is a series of low hills on the west side of the Owyhee River, a branched drainage that winds northwards and joins the Snake River; one feature of the Great Basin Desert is that all rivers flow inwards, ending in lakes or salt pans, and none reach the sea.

One of the most spectacular regions of southeast Oregon is Warner Valley, 40 miles northeast of Lakeview, close to the western edge of the Great Basin Desert; the approach from the west, via Highway 140 or Plush Cutoff Road, experiences a quick transition from moist pine forests to barren, treeless plains. The valley is several miles wide but 50 miles long and contains about a dozen shallow, interconnected lakes plus large areas of pools and marshes (the Warner Wetlands), and is home to many bird species. A steep escarpment rises to the east, formed by Hart Mountain and Poker Jim Ridge, both created by block faulting, where the land on one side of a geological fault rises, leaving the other side stationary. Other examples nearby include Abert Rim to the west and Catlow Rim to the east. The ridge bordering Warner Valley towers up to 3,400 feet above the lakes and is climbed by the unpaved but good quality Hart Mountain Road, the only major east-west route across this part of the desert. The valley is mostly undeveloped, apart from the tiny town of Plush, and there are several places with good access to the lakeshores, ideal for swimming, canoeing and primitive camping.

The hillsides east of Warner Valley, and the grassy plateau beyond, are part of Hart Mountain National Antelope Refuge, which protects the habitat of large herds of pronghorn antelope, plus other desert species like bighorn sheep, sage grouse and mule deer. Once away from the edge of the escarpment, Hart Mountain Road through the refuge becomes flat, straight and smooth, enabling 60 mph travel in most places, crossing seemingly endless grassy prairie. The terrain is similar once outside the NWR, where only a few scattered ranches interrupt the otherwise featureless plains, until the road nears the far side of Catlow Valley, beneath the next block fault cliffs (Catlow Rim). The gravel track (now Hot Creek Road) ends at the junction with paved NV 205, which a short distance north enters the second large nature preserve of this region, Malheur National Wildlife Refuge. This contains 50,000 acre Malheur Lake, plus marshes, sloughs and pools, extending 40 miles north towards Burns, at the north edge of the Great Basin Desert.

Road to the Alvord Desert

South of the junction with Hot Creek Road, Hwy 205 stays along the base of Catlow Rim for a few miles, through private ranchland, then turns east, up a canyon and out into Pueblo Valley, another wide, flat expanse. The road continues south into Nevada but another route branches off at Fields, heading north along the valley at the base of Steens Mountain; this is a narrow, 35 mile long range that contains the highest peak in southeast Oregon (9,773 feet). Fields is another tiny settlement of a few dozen homes, and all roads hereabouts receive very little traffic. There is one fascinating geological site nearby - Borax Hot Springs, a collection of several dozen hot pools, centered around a larger pond (Borax Lake) containing warm water. The place is reached by driving 2.1 miles along an unsignposted dirt road parallel to some powerlines, starting just opposite the 205 junction, then 2.6 miles north along another sandy track. En route are two gates and one warning notice about the dangers of hot water. Also in this area are rusty iron equipment and foundations of the Borax Works, in operation here in the early 20th century. The main lake is good for paddling, though arsenic levels are 25 times above the safe limit, so care is needed not to ingest any water. The exit streams flow northwards to the main hot springs area, spread over several hundred feet, with about a dozen large hot springs and many small ones, lined by colorful green/yellow/red algae and white sinter deposits. Some pools are continuously boiling but most are much less active, and all are surrounded by a mix of green grass and white alkaline earth with nice views across the valley to Steens Mountain and Alvord Lake. Large biting flies are the only bad aspect of this place.

Other hot springs are found a few miles north. The road north of Fields soon becomes unpaved, through the village of Andrews, climbs a slope and rounds a corner to a grand viewpoint of the Alvord Desert, for most of the year a dry lake with a bed of hard baked mud, but covered with shallow, clayish water after rainy periods. The road runs close to the shoreline for about 3 miles, and one track leads to the edge; other parts are privately owned. When not dry, the muddy lake surface creates soft, fuzzy reflections of distant cliffs, part of a strange hazy landscape, much like the Salton Sea in California. Just as the road veers away from the lakeshore, it passes the parking area for Alvord Hot Springs, a small group of brightly-hued streams and shallow thermal pools right beside the road, from where hot water is piped to an ancient wooden bathhouse and a constructed pool about 3 feet deep. The site is not especially appealing, but is popular with a certain kind of traveler. Beyond, the stream flows across salt flats towards the (usually) dry lake. Steens Mountain is close by, its summit in full view just to the west, above the very steep eastern face of the ridge. The wide, gravel road becomes paved again in a few miles, running along the base of the mountain to a junction with Highway 78.

Highways and 78 and 205 are linked by the 30 mile (paved) Lava Beds Road, which runs beside the Diamond Craters, a sizeable area of largely undistinguished lava flows, partly overgrown but including scattered cinder cones and lava caves. The Jordan Craters are a similar, less accessible region further east. Highway 78 leads to a junction with US 95, the one major highway of far southeast Oregon, which passes two sites of interest - one (along a short side road) is the Pillars of Rome, a 5 mile wide series of grey vertical cliffs, eroded into pinnacles and buttes, and a good place for free camping. The other is the Owyhee River, flowing through a shallow valley when crossed by the highway but forming a thousand foot deep canyon downstream, through layered reddish brown rocks; popular for raft trips though difficult to reach overland.