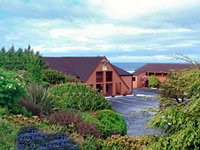 Only a lawn and a few trees separate the Best Western hotel in Gold Beach from the Pacific Ocean; all guest rooms face the sea, and have a private balcony

All hotels in Gold Beach - Affiliate disclosure
The majority of the land along the south end of Oregon's Pacific coast is steep and wooded, restricting access to the shore, and for 25 miles between Gold Beach and Brookings, US 101 passes only one significant beach, either side of the Pistol River, where the sands stretch for over 3 miles, south of the sheer-sided Cape Sebastian. Most of the beach is within Pistol River State Park, and scattered along the coast are an assortment of differently-sized sea stacks, all on the north side of the river. Another, more scenic and isolated set are found just beyond the south edge of the state park at Crook Point, while even further south are more, larger rocks, half a mile out to sea. This is Mack Reef and it contains one of the most iconic features of the whole Oregon coast, Mack Arch, which is the largest sea arch in the state, a shapely monolith with an opening 130 feet across.

The arch is not visible from US 101 as by now the highway is running some way inland, separated from the ocean by a privately-owned belt of forest and bluffs, and Crook Point itself is also off-limits, being a protected wildlife habitat, though the arch can be seen by walking and climbing round the base of the cliffs at the point, at low tide. Another reason for the limited visibility is that the arch is oriented east-west, so the opening is only properly visible from the north or south. The private land opposite Mack Reef extends for 2 miles, up to the north boundary of Samuel H Boardman State Scenic Corridor, a long, thin preserve that continues most of the way to Brookings.

There are several (free) parking areas for Pistol River State Park, on the west side of US 101; the best for viewing the northern group of offshore rocks is near Meyers Creek, 1.7 miles north of the highway bridge over the river, but for exploring Crook Point, the starting place is just south of the river, as the road begins to move away from the shoreline. A little side track leads to a parking lot at the edge of grassy dunes, from where the ocean is a 5 minute walk away. The beach hereabouts is rather featureless, lacking any offshore rocks, and often very windy. Crook Point is 1.7 miles south, reachable by walking either along the beach or through the dunes, initially alongside a shallow lagoon formed by occasional overflow from the Pistol River. This sometimes muddy pond is known informally as Lola Lake, after local resident Lola Gardner.

A small stream (Sand Creek) flows across the far south end of the beach, shortly before the cliffs of Crook Point rise up ahead. A number of dark, jagged, steep sided rocks are accessible at low tide and there are more out to sea, one quite large, supporting grass and succulents. All are part of Oregon Islands National Wildlife Refuge, and closed to public access. Inland, the coastal bluffs are about 100 feet high, barren and windswept, topped by eroded sandstone terraces and mostly without any vegetation, habitat that extends towards the edge of the coastal forest a quarter of a mile away. Beyond the first promontory, at the edge of the point, is another small beach, quite stony, followed by a second promontory, more extensive and rockier, right at the westernmost tip of the coast. After here the land opens out to a much longer stretch of sand, and reveals the first views of Mack Reef and Mack Arch, this latter 1.6 miles due south. The rarely visited beach has the usual mix of driftwood, washed up kelp and other marine debris, and is bordered for the most part by an earthen hillside, sloping up gently to the privately-owned spruce woodland above, but conglomerate rocks are exposed in a few places, weathered into curious shapes and textures - the photogenic tafoni, seen more readily at several other places along the Oregon coast such as Shore Acres.

12 views of the coastline

Beach near the Pistol River