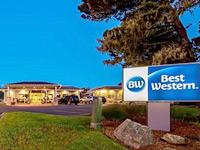 The only chain hotel in Bandon, a full service property with onsite restaurant, in a quiet, scenic location, 500 feet from the beach

Hotels in Bandon - Affiliate disclosure
The beaches at Bandon, by the mouth of the Coquille River, are typical of many areas along the coastline of south Oregon; low tide reveals a wide strip of sand, dotted with large, isolated, steep-sided rocks, some containing arches and sea caves. The place is especially photogenic near sunset, when the rocks cast long shadows across the smooth sand, but the beach is popular at any time, partly due to the easy access.

The rocks extend for a mile either side of Coquille Point, south of the river, and lie in the middle of an otherwise completely sandy section of the coastline, since dunes and beaches stretch for about ten miles in both directions, north to the Seven Devils and Cape Arago, south to Blacklock Point in Floras Lake State Park. The area immediately south of Bandon is Face Rock Beach, named after a distinctive stack just out to sea, though the most scenic part is closer to town, around Coquille Point.

Pool at the entrance to a sea cave
Affiliate disclosure

The main access point to Coquille Point is from a (free) parking area at the west end of 11th Street in Bandon. The coast hereabouts is bordered by low cliffs, high enough for fine, long distance views up and down the beach, which is up to a quarter of a mile wide at low tide, and contains several dozen large rocks, plus several islands just offshore. The scene is subtly different to the majority of the rocky shores further south in Oregon since there are no smaller rocks in between, only the smooth sands. Three of the largest outcroppings are right opposite the parking area and reachable when the tide goes out; one (Elephant Rock) has a sizeable arch. Flat-topped Table Rock is just beyond, facing the north end of the beach, which extends to a jetty at the south edge of the Coquille River, but the more interesting section is to the south; after a short empty stretch there are more big rocks, some sharply pointed, one split by several intersecting caves.

All intertidal rocks are encrusted with barnacles and mussels, plus differently-colored sea stars, while anemones and crabs can be found in the few tide pools, along the edges of the large rocks. Like all of this part of the coast, the high water mark is lined by huge, bleached pieces of driftwood, at the foot of the grassy bluffs that extend some way south. All the clifftop land is privately owned; houses are built right on the cliff edge, usually with steps down to the beach. Several other public access points are reached along Beach Loop Road further south, though the shoreline here is less interesting as the cliffs are replaced by dunes and there are no more offshore rocks.

18 views of the coastline