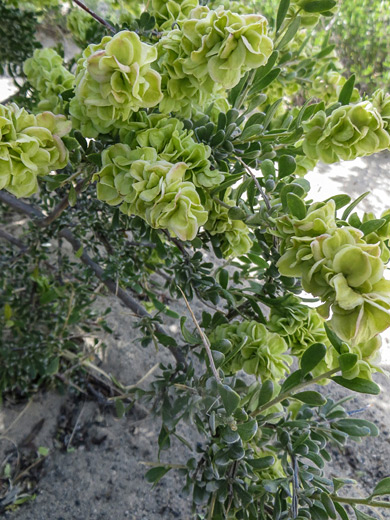 Like most species of this genus, flowers of atriplex canescens are small, and relatively short-lasting; more noticeable are the greenish-yellow fruits, which develop from bracteoles (leaf-like structures subtending the flowers). The fruits form large clusters, and persist for several months, eventually withering to brown. The fruits are up to one inch long and wide, and have four wings extending from base to tip. Wing margins may be lined with tiny teeth.

Plants are woody shrubs, up to ten feet high and similar in width, and are generally not spiny. Branches bear small, dark green, leaves at closely-spaced intervals, and are usually dioecious, producing either pistillate or staminate flowers; these form in narrow clusters up to 5 inches long, at the tip of the branches.